Since linear regulators are power ICs, they normally have some kinds of protection functions. Commonly used protections are current limiter circuits and foldback circuits for overcurrent protection, and thermal shutdown circuits for heat protection. Some of recent CMOS linear regulators can automatically discharge the charge remained in load capacitors, synchronizing the regulators’ ON/OFF switch. This power management function is often used to improve the efficiency of the batteries in portable electronic devices. Since each block discharges the charge remained in capacitors at the moment of power off, the time to wait discharging is shortened and thus it is easy to program ON/OFF sequence of each block. Graph 13 shows an output voltage waveform of the high-speed discharge, XC6221B series when the CE pin is OFF. You can see the remained charge in a load capacitor is discharged in high speed when the CE pin voltage reaches to 0V. 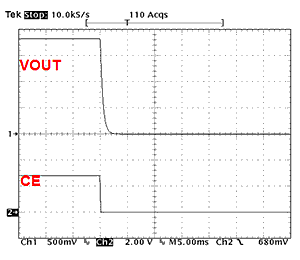 The technologies to use CMOS linear regulators efficiently