Why we could lower the ripple during PFM/PWM auto switching?

The key feature of this IC is low ripple voltage when switching from PFM to PWM control. As the load changes from light to heavy, the PFM pulse interval gradually becomes shorter and more frequent. When the frequency of PWM control is finally reached, control changes to PWM. However, with previous products, it is not possible to generate a properly dispersed pulse before switching to PWM control, and a group of pulses is occasionally generated. (See Fig. 13) Switching is not uniform and dispersed, and thus variations occur in ripple voltage.
(Previous product PFM switch current is 120 mA)

By contrast, switching takes place at a constant interval in PWM control, and thus the current in the coil must be balanced to a constant current and dispersed. PWM/PFM auto switching control in the XC9236 Series dramatically reduces the occurrence of this localized grouping, and by effecting a continuous transition from PFM control to PWM control while maintaining a dispersed and balanced current, achieves low ripple across the entire load range as shown in Fig. 14. 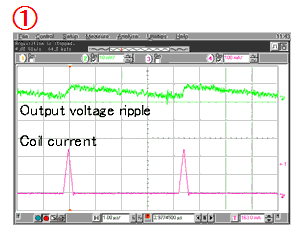 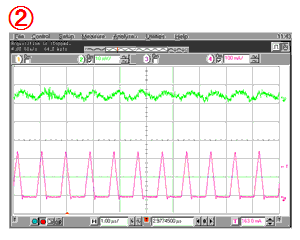 Output current =50mA
Load current is large, but there is no continuous switching: operates on 1 uniform switching cycle. 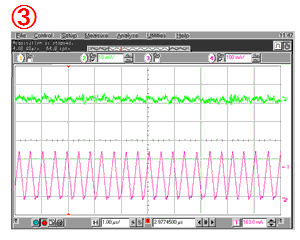 Output current =100mA
Load current is even larger and is close to PWM control frequency, but operates on 1 uniform switching cycle. 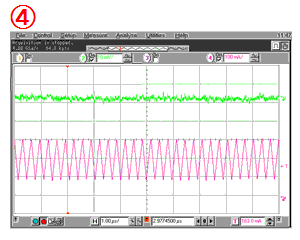 You can also lower the ripple by selecting the appropriate switching frequency.

Torex Products in this article