Current limiting with the foldback and limiter circuits

By combining these 2 circuits, we obtain current limit graphs similar to those on Figure 1. 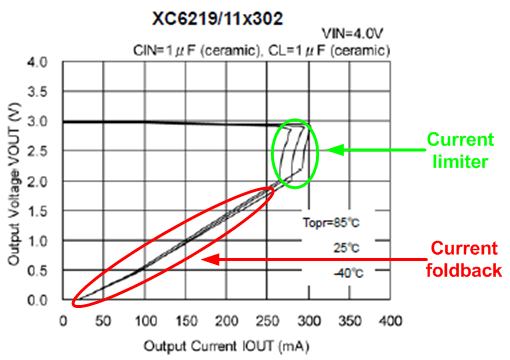 The role of the current limiter circuit The role of the current foldback circuit at start-up Thanks to the above explanation, we better understand the various roles played by the current foldback circuit, not only at start-up but also when the XC6219 is required to supply an excessive output current after its output voltage has settled to its set value. We realized as well that the foldback circuit can help reduce the inrush current at start-up.

Although many other LDO’s (from Torex or competitors) combine the same “current foldback + current limiter” configuration as the XC6219, there are as well many LDO’s whose configurations differ. In the future, we shall explain about such Torex LDO’s in a more comprehensive document about protection circuits.